A man in a tour group Jenny Villalobos was leading told her that he expected to see a jaguar on his trip to Costa Rica. She quietly laughed. “Yeah right,” she thought. In over ten years as a nature guide, she’d never even seen one herself.

But after a two-hour delay while hurriedly boating across a river with her group, there it was. The jaguar slipped through the water in front of them, hunting for turtles. Jenny was astonished. Tears came to her eyes. She hasn’t seen one since.

When an outsider imagines the rainforest, a lush unbroken expanse filled with accessible wildlife comes to mind. But animals are often elusive, and forests fragmented, even in this hotbed of biodiversity. Seeing a jaguar or an ocelot here is something a local naturalist will recall with great wonderment, precisely because it is so rare.

Riding a bus through the countryside near San Ramón, I saw green, rolling hills dotted with small dairy farms, lined with living fences of corn plants. As quaint as the pastoral scene was (evocative of Ireland in some ways), it wasn’t what I’d envisioned a cloud forest looking like. 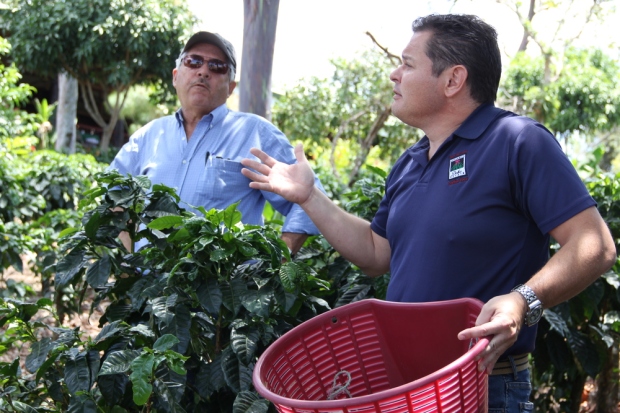 Evangelizing for shade-grown coffee at Doka Estate. When grown under trees, coffee plants are healthier and produce higher-quality beans.

Like many tropical countries, Costa Rica lost a significant portion of its primary forest to agriculture in the 20th century. The US was responsible for most of this damage: they provided massive “aid” loans to cattle farmers in Costa Rica starting in the 1960s in order to feed Americans’ growing appetite for meat.

It’s not easy to come back from losing 80 percent of your forests, but Costa Rica is making a valiant effort through its payment for ecosystem services (PES) program. Using revenue from a gas tax, the government is paying small landowners to help reforest the country, mostly along the central volcanic mountain range and with special attention on water resources and areas of high poverty. Their goal is to have 60 percent of the country covered in forests, a significant feat for any country*.

The gas tax is somewhat of a consolation while you’re sitting in bumper-to-bumper rush hour traffic in San José, the capital city. Because Costa Rica’s electricity supply is already nearly emissions free, its small contribution to climate change comes from agriculture and transportation.

Apart from its bustling pedestrian-centric downtown, San José is a city built for cars. Here you’ll find Detroit’s invasive legacy: the “Auto Mercados”, the Outback Steakhouse and drive-through Taco Bell, the Toyota and Kia dealerships. Despite the lack of infrastructure for alternative transportation here, many cyclists and pedestrians skirt the edge of the road to get from place to place. The bus system is imperfectly designed, but seemingly well-used. 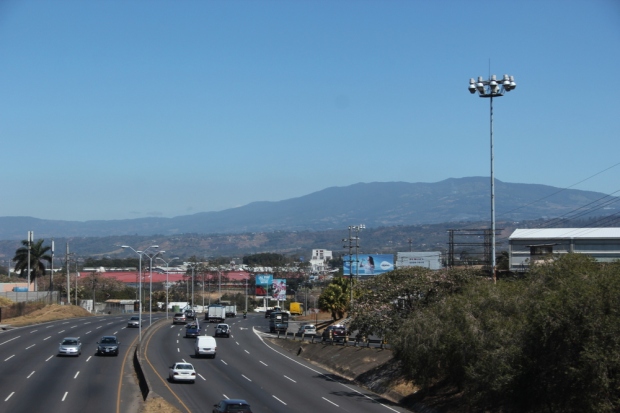 The Pan-American Highway outside  San José 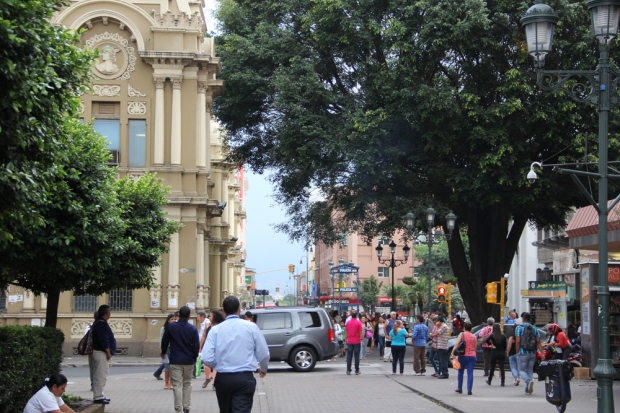 Among the traffic in Costa Rica you’ll find many buses and vans emblazoned with the ubiquitous yellow “Turismo” label. Coffee and bananas are no longer the country’s main exports. In fact, its biggest export isn’t an “export” at all: it’s tourism. The same Americans who enjoyed cheap beef from Costa Rica decades ago are now spending money to see the forests still left standing; roughly a million of them each year.

Costa Rica’s robust ecotourism sector has caught the eyes of major hotel chains who are setting up shop along the coasts, offering all-inclusive vacations that don’t require visitors to engage with or give back to the communities they’re among. It’s a troubling, unchecked trajectory according to the documentary film The Goose With the Golden Eggs.

I mentioned the film and its perspective to my Costa Rican seatmate on the flight back to Baltimore and he bristled. “Many people in Costa Rica are poor,” he said. “And we need those jobs.” The US, he said, shouldn’t dictate how other countries choose to develop their resources.

US involvement in Latin America has had a destructive history, so his sentiment is certainly justified. Tools like the Green Climate Fund, which would subsidize clean development for countries like Costa Rica, are needed to address the debt major polluters like the US owe to the world and prevent further environmental harm.

A school near Fortuna. Without a military, Costa Rica is free to spend its money on universal education, healthcare, and other social goods.

Ingrid, a staff member at Villa Blanca ecolodge, explains how they manage pests without pesticides in their greenhouse. The lodge supplies all its food from here and from local farms and recycles grey water and food waste on-site.

On a planet where natural limits are fast approaching and large corporations run roughshod over local laws and economies, we can build a patchwork quilt of solutions that work from around the world.

In the Cloud Forests outside San Ramón, rural quasi-co-ops are working with a small conservation NGO, the Nectandra Institute, to both preserve the forests and build economic resilience. It’s innovative, grassroots projects like this that show what green development could look like, not only for Costa Rica, but for the rest of us too.

*For a fascinating read on how agriculture can contribute to conservation and thriving rural livelihoods, check out Nature’s Matrix by Ivette Perfecto, John Vandermeer and Angus Wright.